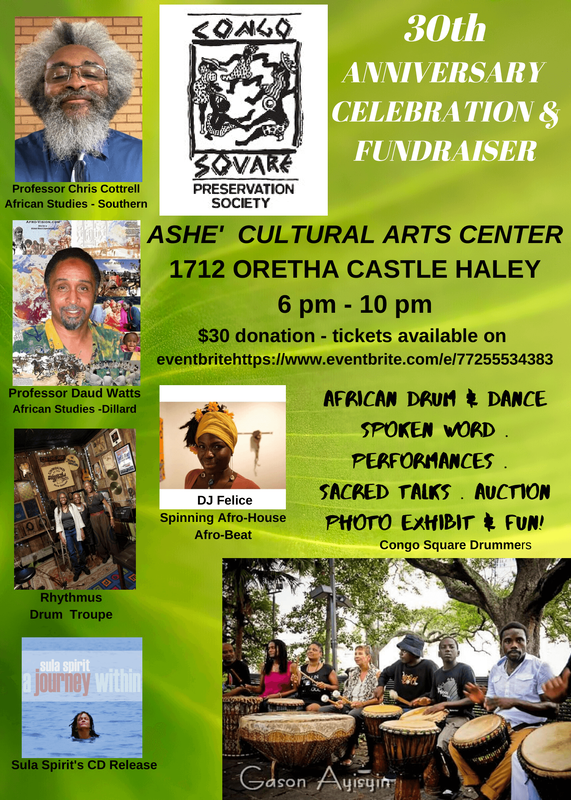 Register Here
Luther Gray and Jamilah Peters Muhammad formalized Sunday African Drumming and Dancing in 1989. Congo Square in Louis Armstrong Park was the approximate site were Indigenous American Indians practiced sacred rituals and enslaved Catholic baptized African, played drums and met their kinfolk from over 19 ethnic groups in Africa. On Sundays all those who gathered, played music, danced, practiced ancient spiritual traditions and vended the way they wanted. The money earned from vending was used to pay for freedom for themselves and family members. The music played created what is now known worldwide as jazz. The power of the gathering bought relief, strength to endure, the will to be free and healing. Every Sunday this opportunity is provided for all. The consistency of the drummers in addition to tourists and makes a difference in the energy of park, the youth from the nearby Covenant House for homeless youth

Over the last 30 years on the leadership of Mama Jamilah and Baba Luther, New Orleans' families and visitors authentic African experiences that educate, heal and creativity. This 30th Anniversary is an opportunity to hear speakers, Professors' Chris Catrell of Southern University in Baton Rouge and Daud Watts of Xavier. Music will be performed by Rythumus, under the leadership of 30-year Congo Square Drummer - Portia Pollard, Congo Square Drummers and DJ Felice Gee.

Revenues received will allow funding to assist with fees for local to participate in the Living Classroom Tour. This is a 90-minute exposure to New Orleans' history, African drumming and dancing as well as a tour of the sculpture garden from well informed and world-renowned musicians and dancers provides great student outlet from testing, augments history lessons, enhances exposure to a fuller history of New Orleans and exposes students to musical dance and language magic. These monies assure that Congo Square expands its role as the Epic Center of Culture in New Orleans. This designation includes memorial services that honor elders and ancestors, community building, partnerships with playwrights, authors and international spiritual leaders.
Support Us